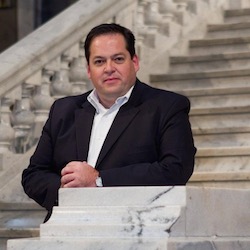 E-mail: jdeckard@hdmfirm.com
James L. Deckard received his B.S. in Finance from Western Kentucky University and his J.D. from the University of Memphis College of Law where he served as a member of the Law Review. After graduation, Jim practiced in Nashville, Tennessee with a large regional law firm, with his work focusing primarily on complex commercial and tort litigation.

“I’ve traveled throughout our commonwealth and have met thousands of our fellow Kentuckians. What makes our state so great is its people. We fight every day to make sure that our clients are treated fairly and with the respect they deserve, and that their voices are heard.”

Mr. Deckard returned to Kentucky to serve as Chief of Staff and Counsel for Chief Justice Joseph E. Lambert of the Supreme Court of Kentucky, and later as General Counsel for Kentucky Governor Ernie Fletcher. Most recently, Jim served as the Executive Director of the Kentucky Bar Association.

During his tenure at the highest levels of law practice and government service, Jim has lectured and written on numerous topics, made frequent appearances on television, radio and in the print media, and has held a variety of memberships on boards and commissions. He has served as counsel in cases before the Supreme Courts of Tennessee and Kentucky and has litigated cases throughout the trial courts of both states. He is a member of the Kentucky Bar Association and is licensed to practice in the all of the state and federal courts of Kentucky and Tennessee.

After her work with a regional law firm in Louisville, Jim’s wife Mandy has returned to school and is completing her studies to become a Registered Nurse. They have two sons, Levy and Henry, and are active in community events and youth sports in central Kentucky.